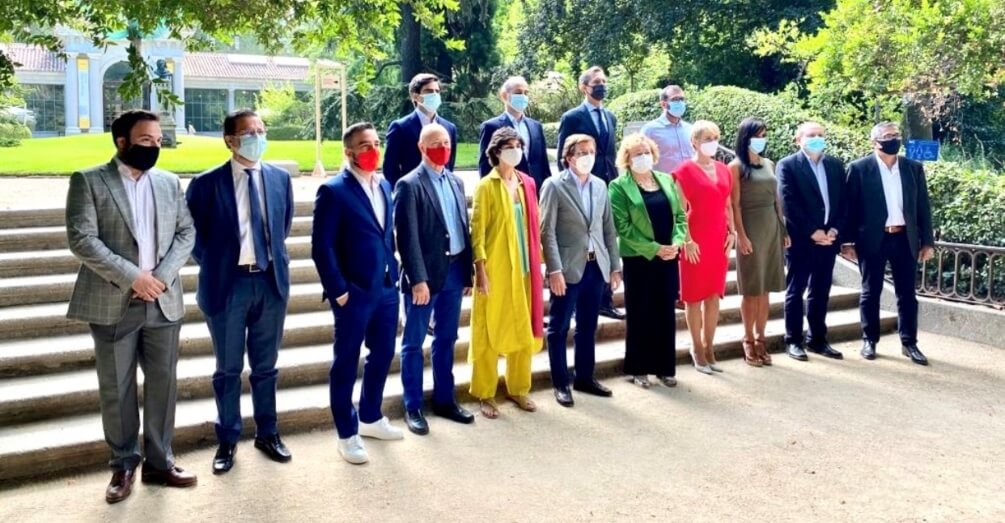 South Summit 2021 -powered by IE University, in collaboration with the Secretary of State for Digitalization and Artificial Intelligence and co-organized by Madrid City Hall, takes place October 5-7 at La Nave.

South Summit 2021, in collaboration with IE University, was presented today, July 12 at the Real Jardín Botánico de Madrid at an event chaired by Mayor José Luis Martínez-Almeida, attended by Begoña Villacís, Deputy Mayor; Carme Artigas, Secretary of State for Digitalization and Artificial Intelligence; Javier Fernández-Lasquetty, Minister of Economy, Finance and Employment of the Community of Madrid, and María Benjumea, Founder and CEO of South Summit.

The theme of this year’s South Summit is Shaping the Future, an invitation to the global innovation ecosystem to be part of transforming our economy based on the pillars of South Summit: Sustainability, Connection, Innovation and Business.

“We seem to be emerging from a crisis that has radically changed our reality. At South Summit we are passionate about change, and we believe that we have to transform crises into opportunities, we want this to be the opportunity to create the world we want.”

Benjumea concluded: “We firmly believe that entrepreneurship and innovation are the way to create a better future, a future that has to be green or it won’t be. At South Summit we want to promote sustainability, as we are convinced that it is not only the future of business but also the only transformation that we as a society have to reach. Therefore, we reinvent ourselves as part of a continuous learning process that will make us the global benchmark for sustainable production and call on our entire ecosystem to join the Net Zero 2030 Commitment, inspired by great leaders who will participate in South Summit. Innovation is a powerful weapon with which together we can imagine the future and make it a reality.”

South Summit 2021, powered by IE University in collaboration with the Secretary of State for Digitalization and Artificial Intelligence and co-organized by the Madrid City Council, will be held between October 5 and October 7 in Madrid. The Spanish capital will be the setting for this meeting in which the South Summit’s Shapers of the future will play a major role, that is, big names who are already contributing to shaping green change and who have confirmed their attendance this year, including: Christopher Gavigan, co-founder with actress Jessica Alba of Nasdaq-listed The Honest Company, a cosmetics, baby products and household cleaning business committed to environmental care and; Gunter Pauli, creator of the Blue Economy concept, which seeks to go beyond the term green economy based on entrepreneurship and wealth creation by learning from nature; Sebastian Siemiatkowski, co-founder and CEO of Klarna, the leading European fintech and the first to join the Climate Pledge, committing to reach Net Zero before 2040; Bisila Bokoko, Global Leadership & Diversity Expert, one of the ten most influential Spanish women in the business world in the United States, as well as founder and CEO of BBES International; Marcelo Claure, CEO of Softbank, the Japanese investment giant behind many unicorns and leader of the world’s largest venture capital fund, Vision Fund; along with Miami’s Mayor Francis X. Suarez*.

IE University and South Summit are launching the ‘Next Gen’ competition for promising young entrepreneurs aged between 14 and 17, who will be able to make their pitch to investors and high-level corporations, as well as drawing inspiration from the presentations of experts and successful entrepreneurs as they prepare for their future as entrepreneurs.

South Summit 2021 will reaffirm its commitment to sustainability, as it undergoes an internal transformation process and maximizing its positive ecological impact by committing to carbon neutral production using recycled and upcycled materials and based on continuous growth as it works to attain the Green Festival certification. Spain Startup South Summit is a signatory of the SME Climate Commitment and is working to achieve Net Zero emissions by 2030, 20 years ahead the commitments laid out in the Paris Agreement. South Summit is not only committed to leading change towards a green future, but is also using its platform to invite its partners, collaborators, startups and institutions, and the entire ecosystem to join them and commit to reduce their emissions to Net Zero.

As in previous editions, South Summit 2021 will host the 100 best startups within the global and national ecosystems, chosen from more than 3,800 projects submitted to this year’s Startup Competition. Some 75% are from more than 124 countries, including: Spain, USA, UK, UK, Nigeria, Germany, India, Mexico, Colombia, Israel, France or Argentina. After an arduous process, the best and most innovative startups in the world have been selected and will be announced next week, representing leading industries such as Fintech, Education, Healthcare, Software & Development, E-commerce, Social Impact, AgriTech, Data & Analytics, Green & Clean Tech Solutions or Logistics. The 100 selected companies will pitch live at South Summit, a key opportunity to position themselves and make high-level connections with corporations, investors and ecosystem leaders.

A global platform focused on innovation that connects the world of innovation from Spain, this year’s event will will continue with a meeting in November in Valencia and another in Bilbao in January.

“Madrid is working and wants to be a leading city in the global arena, thanks to the levers of digitalization and knowledge.”

Similarly, Deputy Mayor Begoña Villacís insisted: “Innovation is everything and in Madrid this innovation launch is called South Summit.”

Carme Artigas, Secretary of State for Digitalization and Artificial Intelligence, described South Summit as “a collaborative ecosystem to promote innovation, which positions Spain in the place it deserves in the world.”

Last year’s South Summit, a virtual event held in October in Madrid, brought together more than 52,000 spectators, 44% of them from abroad, and more than 30,000 active users on its digital platform, who made more than 12,100 contacts. The finalist startups from previous editions have raised more than $6.15 billion in investment.