This survey explores how citizens of eight European countries (France, Germany, Ireland, Italy, Spain, The Netherlands, and the United Kingdom) feel about the technological transformations that are unfolding in their cities and workplaces and how they think their governments should deal with them. Its findings confirm a shared intuition among researchers: the fourth industrial revolution is producing a growing sense of insecurity and uncertainty among our fellow citizens. Over two thirds of Europeans of all ages believe that, if not appropriately controlled, new technologies will cause more harm than good to society in the coming decade. This belief is, in turn, leading to a growing resistance to innovation and to a general demand for more regulation. The vast majority of Europeans surveyed expect their governments to set new laws and taxes to limit automation and prevent job displacement, even if that means stopping technological progress. These results are consistent across countries, age groups, genders and ideological tendencies. Perhaps unexpectedly, Europeans are not only worried about the challenges they will face on the job market, but also about what this will mean for their social lives: over two thirds of Europeans find it concerning that people will spend more time socializing online than in person in the future.

Our data also suggests that people not only worry about the incoming technological transition, but also feel that the institutions tasked with making this process manageable are failing. Most of the people surveyed feel that the educational system is not training them to tackle the challenges brought about by new technologies. This is particularly true for older university graduates who find themselves rudderless in a fast changing job market. Moreover, they also feel that the companies they work for are not adapting correctly to the new scenario and are likely to disappear in the next ten years. The growing disillusionment with the political class is reflected, in turn, in the number of individuals who would rather have an AI make policy decisions than politicians. The loss of trust in political elites that this reveals is consistent with a multitude of other surveys and opinion polls conducted in recent years, and highlights the paradox in which we live: people are disillusioned with governments, yet at the same time ask them to tackle the societal and economic negative effects that emerging technologies might have.

The Fourth Industrial Revolution is producing a growing sense of insecurity and uncertainty among Europeans.

Silicon Valley celebrates on-going advancements in robotics and automation as a phenomenon that will boost economic growth and improve people’s lives. But that narrative isn’t getting through to Europe, where 56% of citizens express weariness about a world where machines perform most of the tasks currently done by humans. This level of concern, which increases significantly as people get older, is close to double the 30% of citizens who are enthusiastic about the prospect. This may have wide-reaching implications for those companies working to automatize their production processes.

As a result, the majority of EU citizens are in favor of governments advancing policy measures for the curbing of automation that companies are able to introduce into their businesses. While the least interventionist measures such as proposing additional taxes for businesses that eliminate jobs due to automation (67 %) or providing extra support for those affected through job losses (71 %) receive a lot of support, more robust government interventions have even greater levels of support: 72 % of individuals surveyed think that governments should set limits to the number of jobs businesses can replace with machines. 74 % think that businesses should only be allowed to substitute jobs that are dangerous or unhealthy.

Figure 1: % of Europeans that would strongly or tend to support the following policies for curbing automation.

The research highlights a paradox, that while the public is fearful of advancements in tech, particularly increased automation, one in four Europeans would prefer artificial intelligence to make important to decisions about the running of their country. In nations such as the Netherlands, Germany, and the United Kingdom, the percentage is even higher – one in every three. Amid the vagaries of Brexit and current questions around the European model of representative democracy, the results tellingly reflect significant levels of disillusion towards politicians.

Figure 2: % of Europeans that are somewhat or totally in favor of letting an artificial intelligence make important decisions about the running of their country.

The survey also suggests that people not only worry about the incoming technological transition, but also feel that the institutions tasked with this process are failing. Most of the people surveyed (60%) felt that the educational system is not training them to tackle the challenges brought about by new technologies. Furthermore, four in every ten EU employees think that the companies they work for will probably disappear in the coming decade unless they apply major and quick changes to their productive systems and business models. This sense of fragility is particularly acute among millennials aged 18 – 34 (54 %), who seem to have a rather pessimistic view on the future of their companies. By contrast, senior employees over 65 years old are quite confident and only 22 % question the continuity of their companies.

Figure 3: % of Europeans that agree with the following statement: “if the company I work for does not implement deep and fast changes, it will disappear in the next 10 years.” 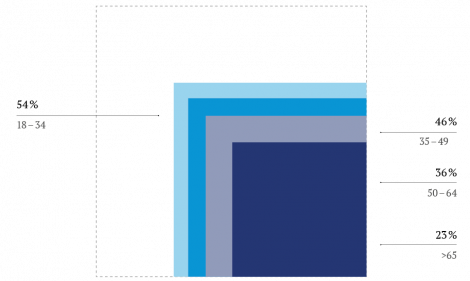