Over the past two decades, the boundaries between the public sector and institutional investing have been blurring with the growth of sovereign investors. Sovereign wealth investors (including public pension funds, sovereign funds, and state-owned enterprises) are strong and discreet representatives of the heterogeneous matrix of institutional investors which support capitalism as we know it today. With assets amounting to $8 trillion, sovereign wealth funds (SWFs) own on average 5% of all listed equities globally, yet, little is known about them. SWFs became more prevalent in the global finance during the Great Crisis of 2008, when they saved multiple Western core financial institutions.

Since then, SWFs from the Middle East, China, Singapore or Africa, have sophisticated their investment strategies. This research program helps better understand this critical long-term investor group and the transformative role SWFs might play on central areas such as technology disruption, sustainable finance, economic development and corporate governance.

The 2021 SWF report, which is presented today, shows that the exponential growth of unicorns and other business giants around the world has been supported by a massive influx of institutional capital.

The Center for the Governance of Change at IE University, in collaboration with ICEX-Invest in Spain, has published an annual SWF report since 2018.

The 2021 report reveals that the pace of direct investment by SWFs from October 2020 to December 2021 has been historic: close to 450 deals, which represent a growth in activity of 171% compared to last year’s report, despite pandemic-related mobility restrictions.

The report highlights another historic figure: for the first time, SWFs exceed 10 trillion dollars in assets under management, 11% more than in the previous report.

To put these figures in context: the assets managed by the 98 active SWFs in 70 different countries, combined, would represent the third largest global economy, only behind China and the United States, and just ahead of India.

The United States remains the top destination for SWF investment, consistently receiving a third of SWF transactions in the SWF reports series. India has risen to second place this year, ahead of China and the United Kingdom.

Singapore’s Temasek and GIC, in this order, are the world’s two most active SWFs. The United Arab Emirates’ Mubadala is third. Technology remains the main sector of interest for SWFs, encompassing 42% of all transactions, up from 25% last year.

Alternative energy sources are a clearly expanding area of interest for SWFs. The report includes a specific chapter on sustainability and the United Nations’ Sustainable Development Goals. 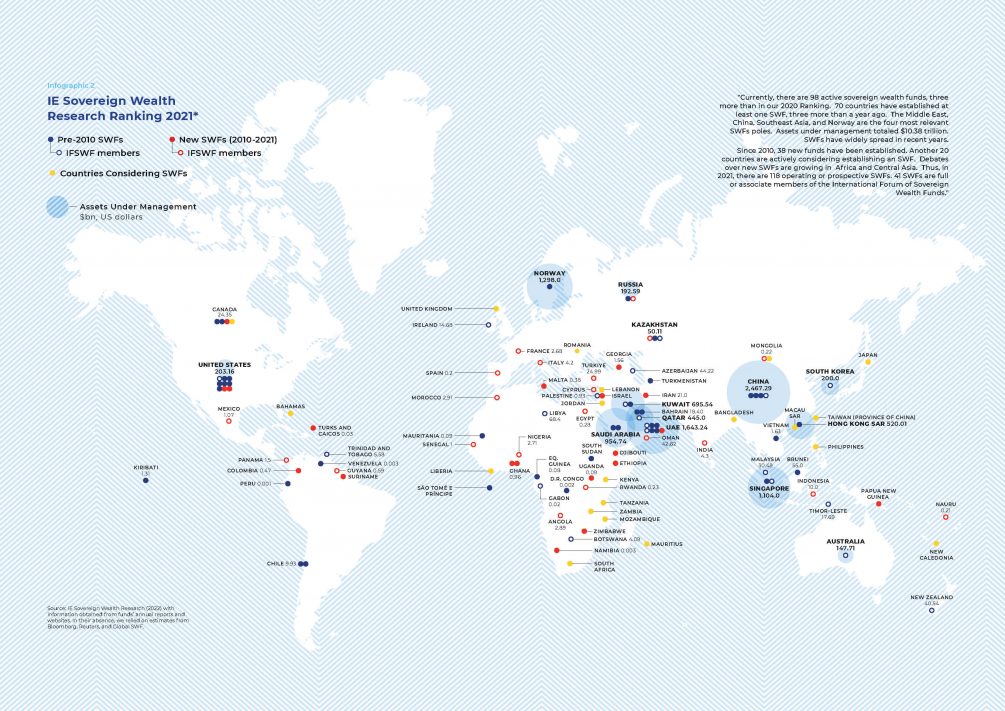