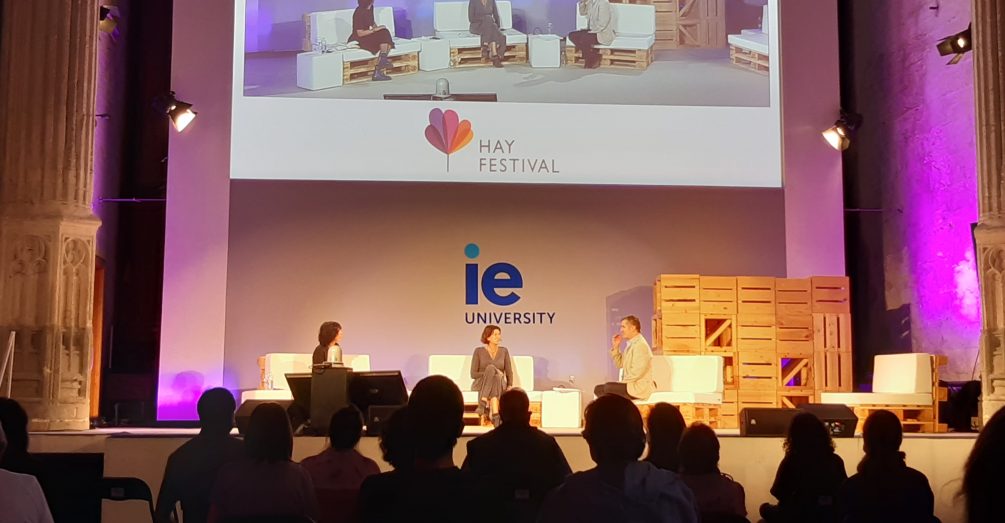 The fifteenth edition of the Hay Festival, the most important ideas event in Spain, was held from September 17 to 20 with a full agenda focused on literature, sustainability and environmental awareness.

During these three days, the culture, arts and humanities lovers were able to enjoy a program with in-person and live broadcast events that included talks with over 145 leading authors and professionals from the worlds of literature, art, architecture and politics.

This edition certainly was very special.  The conditions and restrictions imposed by the Covid-19 pandemic meant that the organisation of the Festival has been one of the most complex in its history. Compared to previous years, the main differences have been the visitor-capacity limited to 120 people at IE University’s Aula Magna, and the reduction of encounters in public spaces in Segovia.

Despite everything, it is also one of the most important editions, as it celebrated that the HAY FESTIVAL received the Princess of Asturias Award for Communication and Humanities 2020. Additionally, the Festival served to support culture, one of the sectors most affected by the crisis, thanks to the commitment of many international artists, through their participation, both in person and online.

Some of the most outstanding interventions were:

About the Hay Festival

In 1987, in Hay-on-Wye, a small town on the border between England and Wales that is home to 1,500 people and two dozen bookstores, two residents, Peter Florence and his father Norman, decided to hold a literary festival. Since then, Hay has grown to become one of the most important forums for ideas in the world, attracting hundreds of thousands of people every year. There are currently Hay Festivals in Europe and Latin America.

Over the last decade, Segovia has captured the spirit of the original Hay Festival, attracting about 20,000 visitors and turning the city into a cultural showcase widely covered by national and international media.