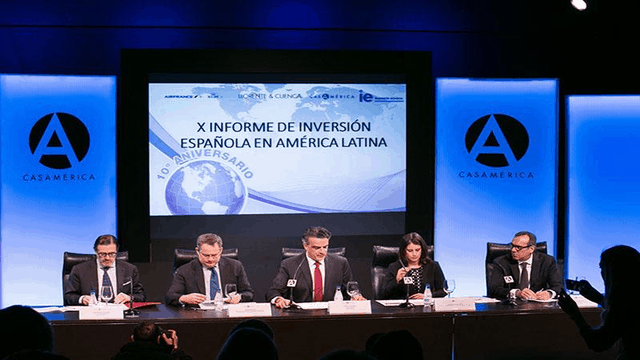 These figures indicate that Spanish firms have confidence in the medium and long-term performance of these markets, in spite of the crisis in Brazil over the last few years, or uncertainty in Mexico due to the renegotiation of the North American Free Trade Agreement NAFTA.  The report does, however, confirm a change of pattern in terms of types of investment, which are now more often based on an organic growth model (64%) involving operations that are already running in Latin America, rather than the purchase of local assets from other firms.

Another trend that has emerged from the latest edition of the Report, headed by IE Business school economist Juan Carlos Martínez Lázaro, is the return of Latin America as a focal point for the investment strategies of Spanish firms.  The region has improved its relative attractiveness vis-à-vis investments in Asia or Africa, which in 2015 and 2016 were firmly on Spanish entrepreneurs’ radars.

“We are delighted to see that Air France-KLM is on the same wavelength as the Spanish companies featured in the tenth edition of this report, says Verónica Catany-Rezk, Sales Director at Air France-KLM for Spain and Portugal. “Our company is growing its presence in Latin America and the Caribbean region with new destinations that include Cartagena de Indias in Colombia, and the prolongation of its flights to Cancun, which now operates throughout the year. Just like these firms, our group continues to be interested in this region, with flights to 27 destinations and a historic presence dating back to June of 1946.”

Peru and Colombia, most popular destinations for investment

The Latin American economies most valued by Spanish firms are those of Peru, whose macroeconomic environment scored 4.02 out of 5 (climbing 0.35 points since last year’s Report) Colombia, with a score of 3.94 (a rise of 0.20 points) and Chile (0.12 points higher). Panama, with 3.69 and Mexico with 3.67 are still near the top of the table, albeit with a slightly lower score than last year. A full copy of the report is available in PDF format at http://informeinversionlatam.ie.edu.

“The markets in which Spanish investment will rise fastest in 2017 are, in this order, Colombia, Chile, Peru, Mexico and Argentina, followed at a certain distance by Brazil, Panama, Dominican Republic and Costa Rica” explained Juan Carlos Martinez, a professor at IE BUSINESS SCHOOL.

José Antonio Llorente, founding partner and president of LLORENTE & CUENCA, pointed out that the figures showed that Spanish companies are optimistic about the region. “This means we can state categorically that Latin America has played, and continues to play, a key role in Spain’s foreign policy. We have to work on the commercial reactivation of the whole of Latin America. This is only fair, given that in recent, dark years, it was the activity of many large and small Spanish firms in Latin America that permitted Spain to mitigate the seriousness of the economic crisis. Now we are in a position to help open up the way back, by exploring with our colleagues ways to foster cultural and economic development that will benefit us all.”

Improvements in Argentina and Brazil

Argentina scored 3.30 out of 5. This rise of 0.49 points shows the largest increase in confidence compared to the previous year. Brazil also saw a rise of 0.46 points with regard to the 2016 report, to achieve a score of 2.89 points.

The report was prepared between October and December of 2016 with the collaboration of LLORENTE Y CUENCA and AIR FRANCE KLM. Some 76 Spanish firms with interests in the Latin America region took part in the survey.  For additional information contact igor.galo@ie.edu.