IE Alumni revolutionize the food industry around the world The food industry opens the doors to IE Alumni who are disrupting the sector.

From traditional Italian Trattorias to worldwide food delivery services, IE Alumni are revolutionizing the way we experience the food industry with innovative ventures across the world.

Every day at lunch time students, professors, Madrid locals, hipsters, executives and health-food junkies flock to the new hot spot in town—just across the street from IE Business School. A long line snakes out the glass door and spills onto the corner of Maria de Molina with Velazquez, as people chat and scan the Honest Greens menu so they can be ready to order when their turn comes.

The health-conscious, modern fast-food restaurant is part of a chain founded in Spain in 2017, featuring dishes ranging from personalized plant-based salads and sugar-free snacks to grass-fed beef and free-range chicken dishes. The organic-chic wooden interiors have captured the attention of the IE community, making the restaurant one of the most visible hot sites around IE.

However, very few might know that this is just the most visible property of IE Business School Alumni Christopher Fuchs’ (IMBA 2005) Urban Gourmet holding, encompassing five restaurants and growing.

Fuchs’ success is eye-catching and speaks to the core values of innovation and entrepreneurship IE fosters. But Fuchs also sits in good company with other IE Business School Alumni mavericks who have pioneered significant change in Spain’s food industry.

Some of the biggest names include: Pablo Juantegui, (IMBA 1985), who took the helm of pizza-delivery giant Telepizza in 2009 as CEO and President in 2016; Diana Morato, (Executive MBA Alumni from 2011) General Manager for Spain of global food-delivery service Deliveroo; and Elizabeth Whiteside, (IMBA 2010), Senior Director of Financial Planning at the Union Square Hospitality Group, a conglomerate with over 20 restaurants in the New York area– including several with Michelin stars.

Madrid is speckled with start-ups created by the entrepreneurial spirit of IE Business School Alumni.

But beyond the flashy disruptors who have rewritten the food sector in Spain and abroad, Madrid is speckled with start-ups created by the entrepreneurial spirit of IE Business School Alumni who are reshaping Madrid’s gastronomic landscape and peppering the city with original and international cuisine.

Here are a few to put on your must-try list: 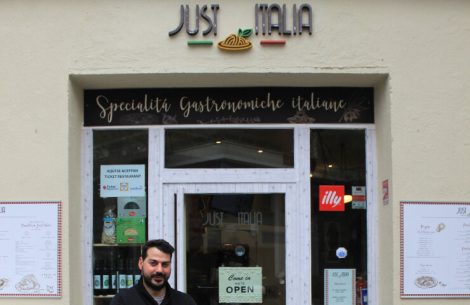 Italian entrepreneur Francesco Vallo (IMBA 2010) was finishing his MBA at IE when he decided to merge his passion for business strategy, entrepreneurship and food. His expanding network of IE classmates turned into his closest friends, and ultimately, business partners in a project that now stands as an unusual Italian food franchise in Madrid. Vallo started importing Italian products to Spain in 2016, with a distribution-only model of untapped Italian food categories. He then ramped up to include a delivery collaboration with Glovo through a 24/7 supermarket.

The Italian venture attracted fresh investors, and turned into a physical store, just one block away from IE. Just Italia welcomes clients to a corner shop that feels like the typical Italian Trattoria, but actually offers full-service catering, restaurant and events-planning.

“I would have never thought that in 10 years I would have created a business with those who were my actual friends. The beautiful thing was that it was not an advantageous approach to networking, it was all spontaneous, and after that, many people from IE started sponsoring me,” Vallo said.

Mtaini’s dream of owning his own business materialized when he opened Makan, which he saw as a chance to showcase his mother’s family recipes. Makan means freedom to Mtaini, who said opening the restaurant brought him happiness.

“I wake up on Monday mornings and I am very happy, because I’m working on something I am passionate about. When there is passion in what you do, there is no way you are not successful,” said Mtaini.

Sumak, Recipes and Stories from Syria Anas Atassi (IMBA 2019) quit his job in the energy industry and decided to breathe life into a new project that weds his flair for cooking and his commitment to paying tribute to his home country, Syria.

Thus was born his cookbook, Sumak, Recipes and Stories from Syria. Atassi said the book’s pages unveil family recipes, stories of people, and memories from his city. Dutch publishing house Nijgh en van Ditmar released the recipe book in January 2019. Atassi said his hope was that the dishes in the book build bridges between the Syrian culture and the rest of the world, with food as a common language.

“I chose the International MBA program at IE Business School because entrepreneurship and innovation are at the core of the program, having a perfect balance between traditional and visionary business education,” he said. The project also participated in Venture Day, presenting Don Buri in front of a panel of judges, placing among the finalists. But after the lab finished, Yuchengco said he and his teammates decided that while there were significant obstacles to launching a project in the food sector, they were ready to plunge in and give it a try.

“It was a challenge since the initial reaction we got was restaurants were a very hard idea to pitch, and even more so to get funded,” Yuchengco said. “The trend now is focused on tech startups and the next disruption. Proving that Don Buri made it to the finals was very big for me and my team.” 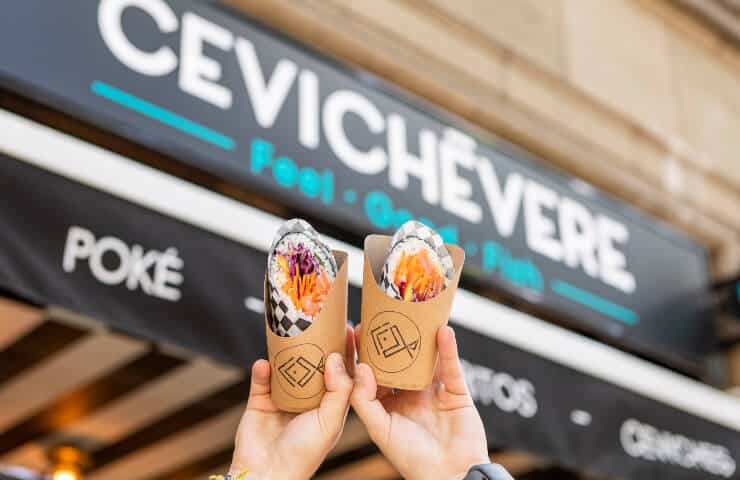 The IE alum said Cevichévere is just the first step as they look to expand into a sprawling Madrid franchise and add the creation of sub brand products like Gluten Free craft beer. García – Muchacho raved about how significant IE’s Venture Lab was to create a real understanding of entrepreneurship– in addition to being the meeting place for the partners.

“Participating in the Venture Lab was incredible because it is the last chance you have to play the part of an entrepreneur before the real world, it’s an amazing place,” he said. “You have great mentors and interesting people and ideas coming out of it.” 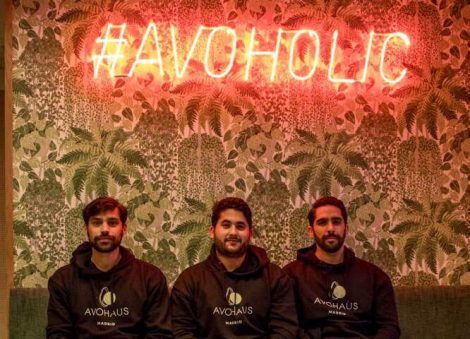 After embarking on his first venture with Cevichévere, Gustavo Pardo Borgogno (MIM 2016) switched gears to focus on  avocados and opened AvoHaus, a colorful restaurant featuring avocado in all dishes.

With a young team leading the concept restaurant in the trendy neighbourhood of Chueca, Pardo said AvoHaus has a mission to help customers discover all the possible variations and benefits of the fruit for all the #avoholics out there.

“The essence of our restaurant is the Latin touch we add to all our dishes. AvoHaus is constantly adapting to offer our customers the best expression of avocados,” Gustavo said. “For me AvoHaus meant a new challenge and a learning opportunity both in my personal and professional path.” Well versed in the traditional art of roasting nuts, Marwan Riachi (IMBA 2014) set up NutNut in Bravo Murillo Street, bringing an elaborate and international menu of dried fruit to Madrid in a new concept store.

The store– which has expanded into a distribution network with product placed in other sales points around the city– offers high quality products and diverse options like dehydrated fruit, custom made chocolates, a wide selection of natural and roasted nuts, typical Lebanese desserts, and original mixes. Riachi offers a 10% discount to the IE community at his store.

“There is an undeniable rise in nuts consumption and demand because people are realizing their numerous health benefits,” Riachi explained. “We felt the market in Madrid lacked a place where someone could buy freshly-roasted, high-quality nuts and where they could openly experience and watch the artisanal roasting process.”