In the face of a possible Fed error, could Trump return? Decades ago, the great American economist Hyman Minsky formulated his famous financial instability hypothesis.  In his opinion, good times lead to bad times.  We become obsessed with analyzing business cycles, but, according to Minksy, understanding credit cycles is key.  And the result is disheartening: complacency during the “good” years leads to over-lending, while a future crisis brews in the excessive credit.  Then, a shock forces many financiers to reflect on their past excesses, and when they suddenly cut off credit flows, a huge recession ensues.  This shock is called the “Minsky moment.”  The catalyst for such a turning point could be the closure of two real estate funds in the summer of 2007 or Black Thursday in 1929.  More of the same.

The Biden administration has proposed a series of fiscal stimuli that—when added to those already approved by Congress—would amount to about $10 trillion if approved.  Is this excessive? Well, when it comes to boosting the income US citizens lost during the pandemic, the answer is yes.  According to the most recent data, the rise in unemployment caused by the pandemic has deprived US families of about $1.3 trillion.  Thus, the stimulus money would amount to more than eight times the depleted income.

Excessive fiscal stimulus can be dangerous because it can lead to unwanted inflation.  Yet, fiscal policy can counteract political excesses through a more restrictive approach.  The Fed, however, issued a new strategy in September 2019.  It essentially went on to say that the 2% inflation target went from being a maximum limit to an “intermediate” one.  In other words, if inflation has hovered below 1.5% for many years, then we can tolerate another few years with inflation approaching 2.5% to compensate for it.  Moreover, if the Fed had always acted with a “proactive” policy—that is, raising rates before inflation became worrisome, generally in the face of a buoyant labor market—it has now chosen a “reactive” policy.  In essence, waiting for a very strong labor market to start generating a verifiable price increase before acting.

Both situations—extraordinary monetary and fiscal policies—might not be concerning if they didn’t happen simultaneously.  The Fed’s new policy was announced before the COVID-19 pandemic, and the US responded with the biggest fiscal stimulus since World War II.  Thus, if the US had reacted to the Japanese attack on Pearl Harbor with fiscal deficits close to 20%, then it would approach 17% between 2020 and 2021.  For its part, the Fed helped the US government finance the war with balance sheet expansions of up to 22% of its GDP.  Currently, it sits at close to 40%, growing at a rate of $120 billion per month.

The consequence of such excesses is an increased risk of inflation.  Between 1942 and 1951, average inflation in the US stood at 6%.  We recently learned that US inflation is already at 5%, with core inflation at 3.8% (see chart below).  Many inflationary phenomena could be more transient this time around, but we’re playing with fire. 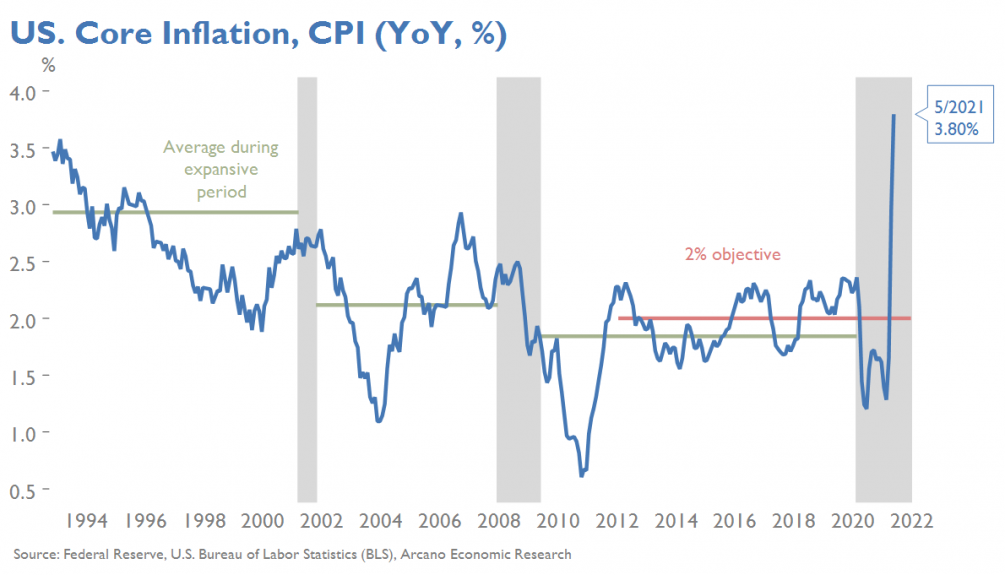 At times, inflation functions as a self-fulfilling prophecy.  If workers expect future high inflation in a buoyant labor market, then they will demand and obtain wage increases in line with expected inflation. This can cause employers to shift to the sale price of their goods or services, generating lasting inflation.

If this scenario materializes and inflation does not revert back, the Fed will have to explain that it made a mistake.  The consequence will be rate hikes ahead of schedule: it will raise rates at the end of 2022, instead of 2024 as promised initially, or 2023 as they claimed last week.  In addition, the Fed will soon announce the end of bond purchases (known as tapering).  In that situation, rate hikes and bond purchases could lead to a technical recession in 2024, amidst a backdrop of widespread concern over inflation.

Could Trump win in such an environment?  History tells us he can.  As Democratic economist Larry Summers recently pointed out, the expansionary policies of Kennedy and Johnson contributed to the inflation boom of the late 1960s (from 2% to 5%), while those of Carter underpinned inflation in the late 1970s (exceeding 10%).  On both occasions, US voters who were worried about price developments opted for Republican candidates (Nixon and Reagan).