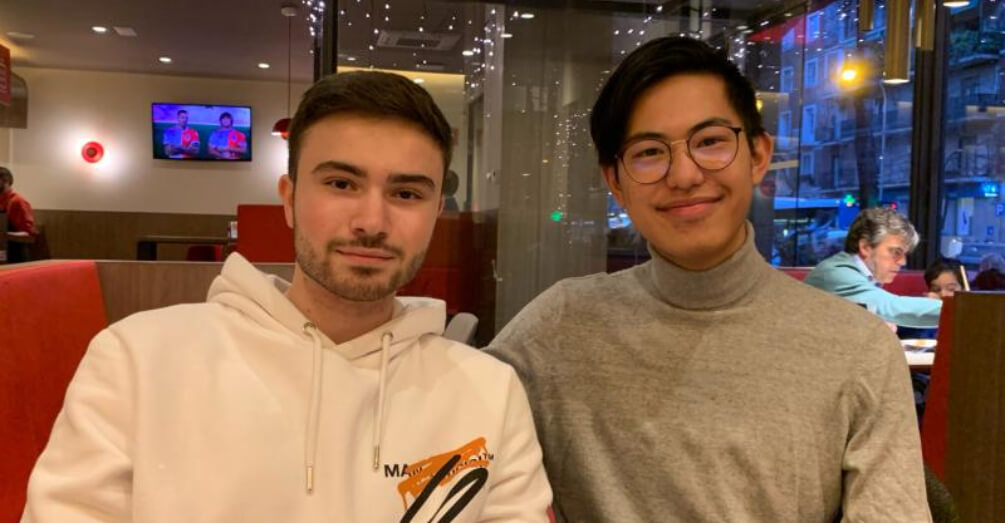 In March 2020, IE University was forced to move all classes online as Madrid and Segovia adapted to the fast-spreading Covid-19 virus. Soon after schools were ordered to close physical campuses, Spain went on a nationwide lockdown. Restaurants, bars and gyms all shuttered activities. Students packed up and went back to their home countries.

But IE Business school students think “opportunity” in such an environment.

Two students used that moment to found The Moving Company.

Bachelor in Business Administration students Wenyang Chen and Álvaro Bermejo met during IE introduction week of 2019. Their encounter marked the beginning of a solid friendship built on wit and a mutual affinity for daring projects.

Everything seemed motionless because of a sticky feeling that nothing could be done.

Bermejo and Chen shook that idea off quite quickly.

They learned, from a friend living in the RESA residence in Madrid, that students were struggling. Going home in a rush, many had left their belongings in their apartments but they still had to pay costly rents each month. Angst and despair crept up on students unable to cancel rent because their stuff would be thrown away if they couldn’t collect it.

But when everyone was panicking, the two undergraduate students saw an unexpected opportunity.

Having stayed in Madrid, they decided to help out with the resources they had: their honesty and willingness to remove and handle students’ belongings– using Chen’s family truck and a rented storage room of about 4 sq. meters. That is how The Moving Company was born.

They said they expected four or five moves in total. But ended up helping more than 50 students.

Soon students from around Madrid, beyond the IE community, were asking for their help.

“When I made the decision to clear my apartment, I was not in Madrid,” explained Alex Benning.

“I remembered Alvaro and Willy started a company for exactly this purpose. I knew that I could trust them with my personal belongings.”

But Benning, who is still in Germany, said he chose The Moving Company for his October move because it made the best business sense. After researching other companies, he found they would not be able to complete the move before his contract expired, and the ones that could, had an extremely lengthy sign up process before they would start.

“The perfect solution was The Moving Company,” Benning said, whose belongings are still in storage in Spain. “Cost efficiency was not the main reason why I chose them since I was looking for individuals I can trust and that were flexible. From the research I made, the moving company was the best money for value option.”

The two entrepreneurs said they plan to scale up their idea in IE Venture Lab, making it a full-fledged moving company.

“Don’t listen to people who will bring your idea down,” Bermejo said. “Pursue it and if it doesn’t work, well, you will still have learned a lot. Just try it.”