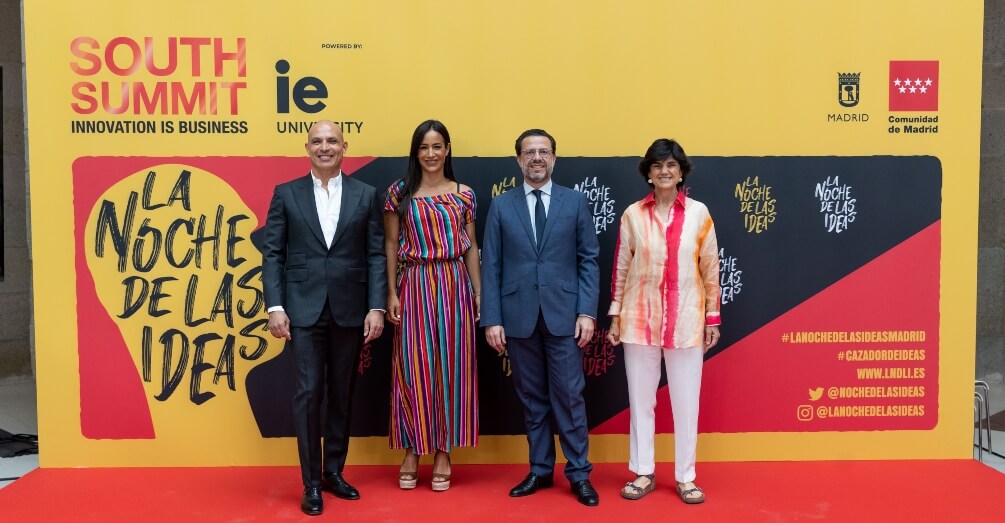 A mobile unit will “hunt” ideas for five days on the streets of Madrid: shortlist of proposals will be broadcast at huge event in the capital’s Plaza de Colón on June 10.

To mark its tenth anniversary, South Summit is launching ‘La Noche de las Ideas’ (Ideas Night) an initiative to introduce the capital’s residents to innovation and listen to their proposals. South Summit will take place between June 8 and June 10 in Madrid’s La Nave, and will be inaugurated in the virtual presence of the former US vice president Al Gore, along with Pablo Isla, the former president of Inditex and current Chairman of the International Advisory Board of IE University.

In collaboration with the Community of Madrid, Madrid City Hall and IE University, a mobile unit will “hunt” for innovative ideas on the streets of Madrid between June 1 and June 5. The shortlisted proposals will be broadcast in huge event in the Plaza de Colón during the afternoon-evening of Friday, June 10. The unit hunting for ideas will be located in five well-known spots in the Spanish capital: Plaza de España, Ciudad Universitaria, Plaza de Callao, Plaza de Chueca and Plaza de las Ventas, and will collect the public’s ideas and discuss with them transcendental issues such as sustainability, mobility, advanced technologies, digitalization, flexibility, welfare and culture, among others.

“In the last ten years we have been organizing South Summit, we have managed to turn Spain, and especially Madrid, into an innovation hub. Now, with the ‘Night of Ideas’, we want to go a step further and bring innovation closer to the public, making them participants and involving them in the construction of our present and future.”

Actor Javier Márquez will lead the interviews with the mobile unit, in a bid to introduce Madrid’s resident to innovation while garnering their ideas. He will also be the presenter, together with journalist Ainhoa Arbizu, of the final party, which will be held on Friday, June 10, from 8 pm in the Plaza de Colón. There, the best ideas “hunted” throughout the week will be presented, along with performances by musician Abraham Mateo and DJs Helena Piti and Bob Sinclair, open to the public free of charge until full capacity is reached.

The party will culminate five days of meeting with the residents of Madrid, as well as three days of intense activity at South Summit, a global meeting of entrepreneurship and innovation.

During the presentation of ‘La Noche de las Ideas’, Javier Fernández-Lasquetty, the Madrid regional government’s Minister of Economy, Finance and Employment, said: “innovation takes place when individuals are free to think, experiment and speculate. Madrid is the place where individuals can exchange ideas, where there are no limits on business or barriers to undertaking initiatives by those prepared to risk their capital or assets. Madrid is the place where people from all over the world come in search of opportunities: to prosper in their professional career, to launch an innovative business idea or to invest in an exciting project.”

Begoña Villacís, Deputy Mayor of Madrid, added, “Madrid has now become a vital center of opportunities and is already the sixth-best city to invest in, according to the Financial Times.” Villacís also pointed out: “La Nave has become too small for South Summit and it is a great time to make the leap through ‘La Noche de las Ideas’ to achieve connectivity between the public and innovation. Society is to some extent afraid of progress, so bringing innovation closer to people is essential if we want them participate and reduce these misgivings.”

Bernardo Hernández, renowned entrepreneur and investor, also participated in the event, reminding attendees: “a very important part a successful idea is sharing it and allowing talented people to shape and execute it, which is the aim of ‘La Noche de las Ideas’. The secret of a good idea is largely its execution, so the team is essential to get the necessary resources for the market to validate it and make it a success.”