We offer significant resources to enrich your experience

Our fully equipped library allows you to do research and work on projects; in the student hub you’ll work with peers gaining inspiration and insight; the media lab will let you explore your creativity. IE faculty will become your mentors, teaching and guiding you through your journey. Talent and Careers will offer you support to launch your career and succeed in the job market. The spirit of entrepreneurship and the integration of technology found all around you will prepare you for the future of your choice.

The IE Module lays the foundation for learning at IE University. You will acquire basic skills reflecting the university’s culture and vision alongside transversal components of the module. This will be reinforced with progressive learning focusing on gradual increases in difficulty in a multi-perspective environment.

Students at IE University are surrounded by significant resources to enrich their learning experience. Our fully equipped library will fuel your academic rigor, faculty members will become your mentors, the Language Center will open you up to a whole new world... all to prepare you for your future.

The IE Foundation Prizes in Humanities is an annual award acknowledging the best written and audiovisual work by IE students and alumni. Created by the IE Humanities Center in collaboration with the IE Foundation, the prize voices the humanistic vision we expect all our students to express and appreciate.

IEU Counseling provides support to undergraduate students as they strive to find a balance between academic obligations, extracurricular activities, and their personal and social lives.

The Mentorship Society is a service that caters to first-year students (Mentees) who want to benefit from the company and guidance of older, experienced students (Mentors). The aim is to help freshmen transition to university life smoothly and make the most of their first year at IEU.

Counseling Services offer undergraduate students the option of working with a guidance counselor or a psychotherapist to address mental health difficulties during their stay at IEU. The department also offers group activities during the academic year in the form of workshops, peer support meetings, guided meditation, and yoga classes.

Our mission is to make your transition to Spain as smooth as possible. The Student Services team is available to support you with the immigration process, to help you choose medical insurance and to help with the process of relocating to Madrid or Segovia, so that you can focus on your studies and enjoying university life.

With so many neighborhoods and housing options in Madrid, it is hard to know where to start. We offer you the help and support you need to choose the housing option that’s best for you.

Segovia is a World Heritage Site featuring cobblestones, a famous Roman aqueduct. We help you explore the housing options available and finding the choice you like best.

Medical insurance is a necessity for all students. Whether you have public or private insurance, we help you learn about your coverage in Spain.

We will clarify any questions you have about visa requirements, guiding you through the process of getting your visa.

Choosing a career path is one of the most important decisions you will have to make. IE Talent & Careers helps students launch their careers across industries around the globe. We are here to help you every step of the way, starting your journey to success in the job market.

Our Women Initiative’s goal is to inspire confidence and advance women along their pursuit of success. IE University is ranked 25th in the world in the Times Higher Education (THE) Global Employability Ranking 2020, consolidating IE University’s position among the best-rated universities by recruiters and managers of international companies.

THE’s ranking assesses the degree of employability of 250 universities in 43 countries and analyzes the opinion of 9,000 recruiters and managers of large companies that have hired more than 300,000 young graduates over the last year. Recruiters have contributed to the ranking with their opinion on the degree of employability of graduates in different regions of the world, from the United States to Japan. The panel was made up of experts from 22 countries. The top 25 universities in the ranking include nine US universities, 10 European universities, three from Asia, two from Canada and one Australian university. In addition, IE University is ranked as the best Spanish university in this global ranking of employability. IE University is part of the Amazon Despega programme, an initiative to boost the digitization of more than 50,000 Spanish SMEs after the pandemic. This liquid recognition is an example of the values IE University embraces, within the framework of sustainability. “The philanthropist is an entrepreneurial leader of a project of social transformation”, says CaixaBank and IE University report on Spanish philanthropists

The study gathers the conclusions from interviews with philanthropists, foundation managers and experts in the sector. By training and coaching businesses, SMEs will overcome existing barriers to sell online in Spain and abroad. 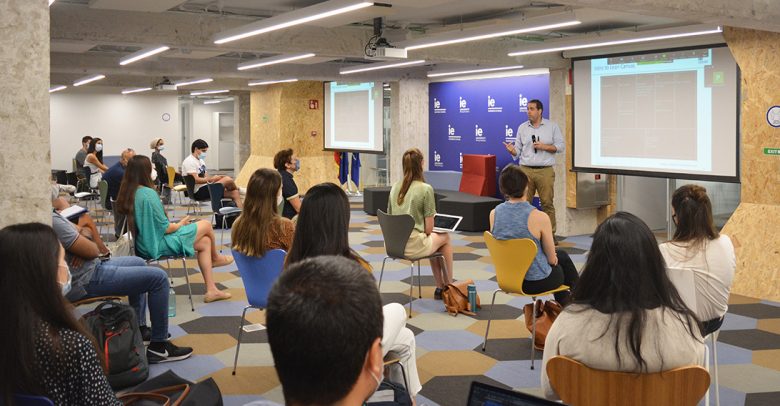 The Summer Booster runs from July 27 to August 28.

Only a truly rounded individual will be ready for the changes the future will bring. Someone with practical skills and a broad understanding of the world, a flexible mind and the curiosity to probe further into their chosen field. To this end, we have created this section in which you will find relevant insights in the form of ebooks to explore more in-depth how technology and digital transformation affect the fields of our bachelor programs.