Sovereign Wealth Funds triple their investments to 450 in 2021, according to IE University and ICEX-Invest in Spain Report 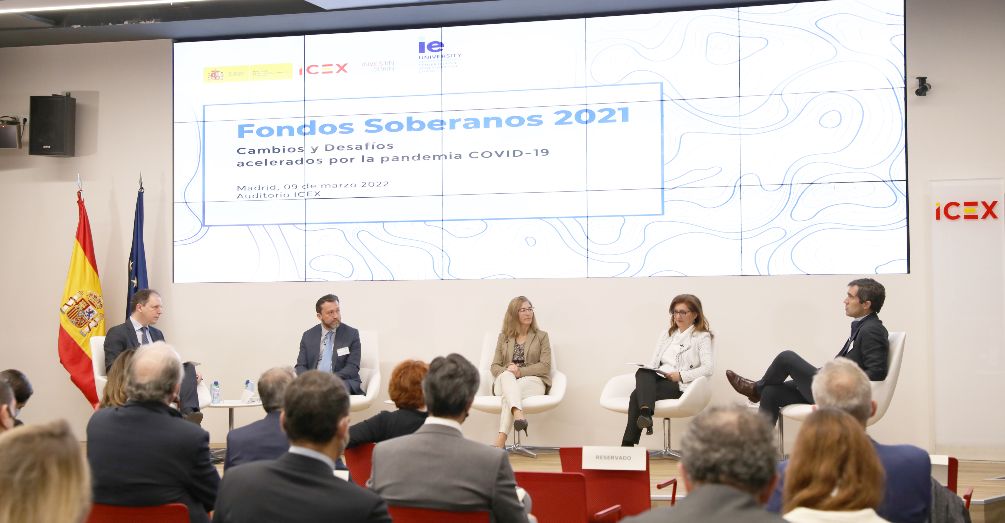 Sovereign wealth funds increased the pace of direct investment during 2021, with 450 operations, registering a growth of 171%, according to the latest Sovereign Wealth Funds 2021 Report, prepared by the Center for the Governance of Change of IE University together with ICEX-Invest in Spain.

The presentation of the report, which took place at ICEX headquarters, was chaired by the Spanish Secretary of State for Trade, Xiana Méndez, and Manuel Muñiz, dean of the IE School of Global and Public Affairs at IE University. In addition, a panel of experts was moderated by Alberto Sanz, Director of Financing and Investor Relations at ICEX-Invest in Spain. The director of Sovereign Wealth Research at the IE Center for the Governance of Change, Javier Capapé, outlined the main keys of the publication, which analyzes the trends of these large international investors during 2021.

The report notes that the most active SWFs last year were two Singapore funds: Temasek and GIC. The Emirati Mubadala, with 80 transactions in the period analyzed, is also at the top of the ranking. Also very active, but with a more domestic focus, are the Russian Direct Investment Fund and India’s National Infrastructure Investment Fund. The United States holds its place at the top investment destination for the funds for another year, while India rose to second place in terms of operations, ahead of China and the United Kingdom.

Technology remains the main focus for SWFs, accounting for almost 42% of all transactions. An increasing number of operations were carried out through co-investments with venture capital industry leaders. The report, which analyzed 1,900 co-investments, highlights Sequoia, Tiger Global or NEA as some of the usual partners for SWFs, although new arrivals in this asset class such as Goldman Sachs or BlackRock are taking on an increasingly relevant role.

“Private technology companies across a broad spectrum of industries are increasingly attracting institutional money, with no shortage of sovereign wealth funds.”
Javier Capapé, director of Sovereign Wealth Research at IE University’s Center for the Governance of Change

“For the first time sovereign wealth funds exceed $10 trillion in assets under management. This historic milestone is part of a process of economic and social transformation accelerated by the pandemic and the geopolitical crisis,” said Javier Capapé, director of Sovereign Wealth Research at IE University’s Center for the Governance of Change, adding: “Funds are transforming at the same pace: direct operations in unlisted companies are skyrocketing. Private technology companies across a broad spectrum of industries are increasingly attracting institutional money, with no shortage of sovereign wealth funds. Their long-term vision allows them to bet on these companies that are transforming the way we fight climate change (betting on renewables and new energies such as fusion), understand money and transactions (fintech and crypto), provide food security (agritech) or accelerate a more circular economy (recycling and sustainable production).”

Within the technology sector, software companies, fintech, neobanks and cryptocurrencies have also received sovereign capital. Biotechnology and health technology continue to be a focus of the 90 funds analyzed by the report, with operations in 15 different countries, from Finland or Vietnam to Spain, in which GIC the sovereign wealth fund of Singapore, invested 1 billion through its subsidiary in the US, Biomat.

“Foreign trade is proving to be a powerful engine driving the economic recovery of our country and is reaching record highs.”
Xiana Méndez, Spanish Secretary of State for Trade

In this regard, Xiana Méndez highlighted the positioning of Spain’s foreign sector and  attractiveness for foreign investment. “Foreign trade is proving to be a powerful engine driving the economic recovery of our country and is reaching record highs. And not only in the field of exports. Foreign investment has also performed well: according to FDI Markets, Spain was the third destination globally for foreign greenfield projects in 2021, standing out in innovative activities and areas with high levels of technological content.”

SWFs increased their commitment to Spain and its companies between October 2020 to December 2021, investing more than €2.8 billion in 12 Spanish companies, a record amount, only surpassed by 2011 and 2009, when the Emirates’ Mubadala took control of Spanish energy company CEPSA.

Growth in SWF investment  has doubled since last year’s report, with the same number of operations thanks in large part to GIC, one of Singapore’s two sovereign wealth funds, and a standout country, Abu Dhabi.

The Sovereign Wealth Funds 2021 Report, prepared by IE University’s Center for the Governance of Change, in collaboration with ICEX-Invest in Spain, analyzes 448 operations worth $120 billion, a growth that triples the values of the previous report, making 2021 a record year.