More than 3,000 entrepreneurs and 200 global funds shine as the protagonists of South Summit Madrid 2022 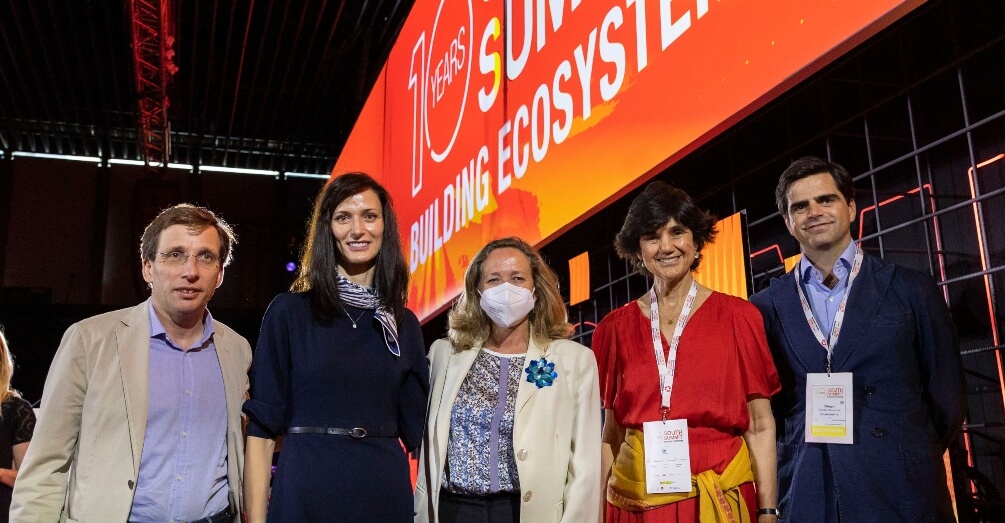 South Summit 2022, powered by IE University, is being held until Friday, June 10 at La Nave in Madrid and brings together key players within the innovation ecosystem (startups, corporations, investors and institutions).

South Summit, the leading meeting of the innovation and entrepreneurship ecosystem, opened on Wednesday and will run until Friday, June 10.

The opening ceremony was attended by Nadia Calviño, First Vice President of Spain and Minister of Economic Affairs and Digital Transformation; Mariya Gabriel, European Commissioner for Innovation, Research, Culture, Education and Youth; José Luis Martínez-Almeida, Mayor of Madrid ; María Benjumea, founder of South Summit, and Diego del Alcázar, CEO of IE University, along with Manuel Llamas, Deputy Minister of Economy of the Community of Madrid, and Paulo Alvim, Minister of State for Science, Technology and Innovation of Brazil.

During her address, Nadia Calviño, First Vice President of the Government and Minister of Economic Affairs and Digital Transformation, said: “The slogan ‘simplifying the difficulties’ of this edition of South Summit is just what we need today: references and guide routes to look to the future.”

She added: “Our recovery plan is the most ambitious in Europe. We expect this year to be crucial in terms of innovation and development, as Spain is on its way to becoming a major startup market. We are carrying out a package of reforms that go hand in hand with the largest investment in the history of Spain.”

“We don’t just want startups to be created in Spain, but also to grow and become pioneers and leaders worldwide. This ecosystem is an opportunity for our country.”

Mariya Gabriel, European Commissioner for Innovation, Research, Culture, Education and Youth, also took part in the opening ceremony, remarking: “startups, investors and companies have to strengthen ties because they are the main assets of innovation. We need you to lead innovation and show that Europe can be the engine of startups.”

She noted, “in 2021 there was the same level of investment in startups in Europe as in the United States. The innovative ecosystem is maturing and being able to compete with any European or global power. We will only be able to take advantage of our potential if we support innovators in all European regions. This is why we need initiatives like South Summit.”

Regarding the Spanish ecosystem, the European Commissioner pointed out during her speech at South Summit that “Madrid is considered an innovative force in Europe. In fact, it is one of the top five ecosystems in Europe after Paris, Berlin, Dublin and London.”

The official inauguration of #South Summit22 was also attended by José Luis Martínez-Almeida, Mayor of Madrid, who defined the meeting as “a bright idea within a very difficult scenario, similar to 2012.” Martínez-Almeida also highlighted “the tools provided by South Summit: innovation, talent and future, to face the future ahead of us,” in addition to the fact that the theme of this year’s meeting, ‘decoding complexity’, “raises a question for the authorities: what do we have to do so that it is not difficult to create, innovate and learn.”

Welcoming attendees to the tenth edition of South Summit, María Benjumea, founder of South Summit, recalled that, “every new project brings with it new responsibilities. From South Summit we will continue with initiatives that guarantee the future of the next generations, where sustainability and digitalization will be the cornerstones.”

Diego del Alcázar, CEO of IE University, co-organizer of South Summit, also highlighted South Summit’s success over the last decade. “We could not have imagined 10 years ago how far South Summit was going to go. Today we are in Madrid, but a month ago we were in Brazil. And I can assure you that we are not going to stop here. We will continue like this for the next 10 years,” he said.

After the official opening, the main stage hosted a talk between Íker Casillas, captain of the Spanish national soccer team between 2006 and 2016 and founder of SportBoost, and Andrés Saborido, director of Wayra. The conversation focused on the power of sport to change the world, with Casillas arguing that “technology and innovation bring great advances to sport. For example, in soccer it provides us with all kinds of measurements such as passes, kilometers, times.” But he also recognized the fears that entrepreneurs suffer initially: “I was also afraid to to start in something unknown, something I didn’t know. That’s why we created SportBoost, to help entrepreneurs and people who don’t have the resources and give them the push they need.”

Wednesday morning also featured discussions on the metaverse, a new technology with multiple applications in various sectors. For example, in real estate and construction, as demonstrated by Hrish Lotlikar, CEO and co-founder of SuperWorld, and Darren Anderson, Asset Management Manager at Ferrovial USA, in the talk Real Estate & Construction Opportunities in the Metaverse’. Both executives stated that the idea of buying virtual properties “is already a reality,” and also insisted on the idea of “the need for governments to create regulations to legislate and regulate these new realities.”

Until June 10, South Summit will be the place to make global connections and generate real business opportunities within the entrepreneurship and innovation ecosystem. This year, South Summit will bring together more than 3,000 entrepreneurs, 15 unicorns, 200 investment funds (72% of them international), with a portfolio of 250,000 million dollars, and more than 650 spearkers in eight content scenarios.