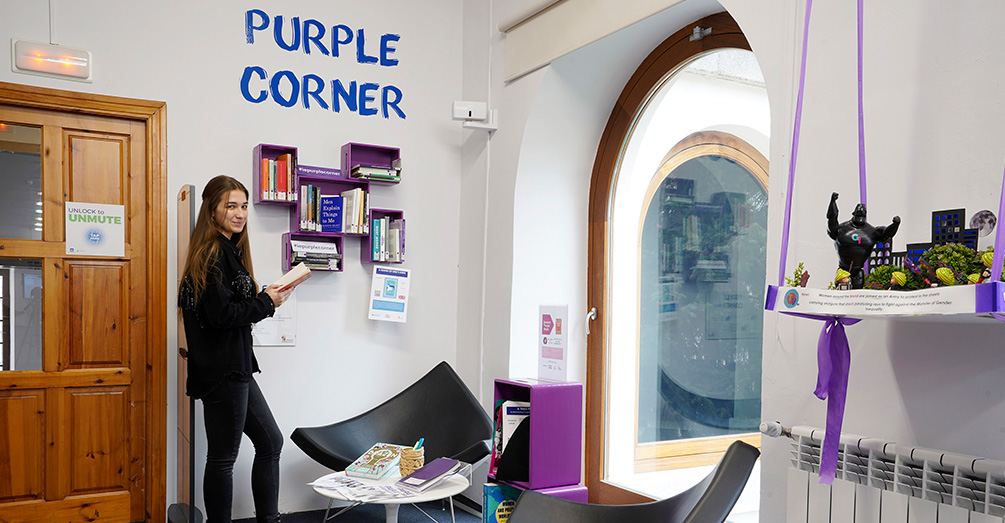 The IE University project will be presented at the ALA Chicago International Congress, to be held virtually from June 25-30.

The American Library Association (ALA), the oldest such organization in the world, and based in the United States, has recognized the Purple Corner gender equality project promoted by IE University’s library as one of the best library practices in the world.

The ALA, the largest in the world, with more than 62,000 members, has selected a total of 36 international projects within its Best Practices from World Libraries program, which aims to identify the most outstanding projects that show the value of libraries in promoting social justice and inclusion by 2020. Within this context, it has highlighted IE University’s Purple Corner, the space created in collaboration with the Vice-Rector’s Office for Students, the regional government of Castilla y León and the IE Library, which aims to promote equality, raise awareness and prevent gender violence in the university context.

“Purple Corner promotes gender equality and informs about the resources available in the event of any kind of sexist aggression.”

“Purple Corner promotes gender equality and informs about the resources available in the event of any kind of sexist aggression. Students, professors and administrative and services staff at IE University can access all kinds of information on gender equality, such as articles, bibliography, reading suggestions or brochures with practical information. Its main objective is to raise awareness about the importance of achieving real equality and empowerment of women,” says IE University library.

Among the libraries selected in 2020 by the ALA are, among others, the State Library of Queensland (Australia), the Ferguson Library (Stamford), the West Vancouver Memorial Library (British Columbia, Canada), the Helsinki Central Library, Oodi (Finland), the Zentral-und Landesbibliothek Berlin (Germany), the Charles Evans Inniss Memorial Library University of New York (United States), the University of Victoria Libraries (Canada) and nine Spanish projects, including the one presented by IE University. From June 25-30, the ALA had planned to present the 36 projects selected at its annual conference in Chicago, which has been cancelled due to the covid-19 pandemic, although the projects will finally be presented online.

Purple Corner is an example of IE University’s commitment to education in equality and against any kind of gender-specific violence. It is a space linked to Agenda 2030, approved by the UN in 2015, in which countries set 17 Sustainable Development Goals, ranging from the eradication of poverty to the fight against climate change, education, women’s equality, the defense of the environment and the design of our cities. IE University’s Violet Corder relates to the fifth of these UN goals, which expressly refers to gender equality.

A large number of novels, essays and academic studies on gender equality are available at the Purple Corner, many of them by well-known authors whose thinking has decisively influenced the feminist movement. In addition, to enrich the Purple Corner, any member of the IE community can suggest books or articles that address gender equality. In addition, each month the library highlights a book recommended by any member of the community.