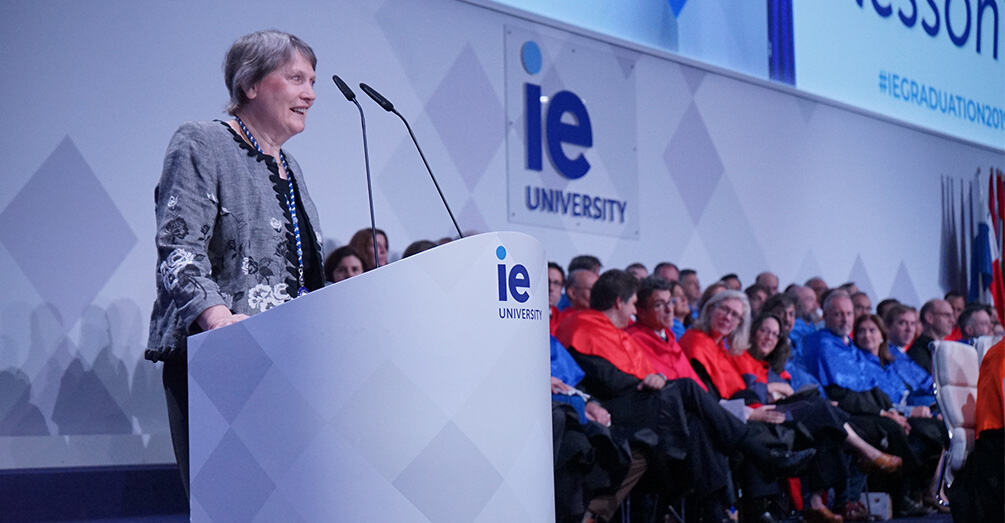 Helen Clark, former Prime Minister of New Zealand, has been awarded the IE University Medal for her contribution to the defense of the environment and gender equality. Santiago Iñiguez de Onzoño, President of IE University, today presented the distinction to Clark at the IE University graduation ceremony. More than 1,800 students from IE University have graduated this year at an event attended by Ford Foundation president Darren Walker.

Helen Clark, the first woman to head the United Nations Development Program (UNDP), has been honored with the IE University medal for her advocacy of a comprehensive sustainability program in New Zealand to address the challenges of climate change as well as supporting and promoting gender equality in her position as a member of the Council of Women World Leaders.

Santiago Íñiguez de Onzoño, president of IE University, presented Clark with the award highlighting her contribution to diversity, sustainability and leadership. “It is always a satisfaction to recognize the work of leaders and humanists like Helen Clark, an inspiration for our students graduating today and who will be the leaders of the future, committed to the humanities, diversity management and the impact of digital transformation and innovation in the business world,” said Santiago Íñiguez, president of IE University. The ceremony was also attended by Karima Banyaich, the Moroccan Ambassador to Spain, as well as Nigel Fyfe, New Zealand’s Ambassador to Spain.

The graduation ceremony was also attended by Darren Walker, President of the Ford Foundation, one of the most important philanthropic organizations in the United States with donations worth more than $13 billion, who highlighted the three priorities of a 21st century leader: “Build long-term value, consider all stakeholders and measure social impact”. Along with Walker, the graduation ceremony was also attended by Kofi Appenteng, President of the Africa-America Institute and a member of the IE University Fund, Jorge Hevia Sierra, Former Ambassador of Spain to the Organization of American States, and H.H. Prince Mansour Bin Khalid Al-Saud, Ambassador of Saudi Arabia to Spain.

IE University has students from 130 countries on campus this year and it has become one of the most diverse academic institutions in the world, as reflected in this year’s World University QS Ranking and Which MBA’s Masters in Management ranking – The Economist.

Regarding gender, 51% of degree program students and 39% of IE University academics are women. “Diversity is part of the DNA of our institution. We work to offer an innovative, entrepreneurial ecosystem, with students and teachers from around the world, from different cultures and backgrounds, to enrich the learning experience,” said Santiago Iñiguez de Onzoño, President of IE University.