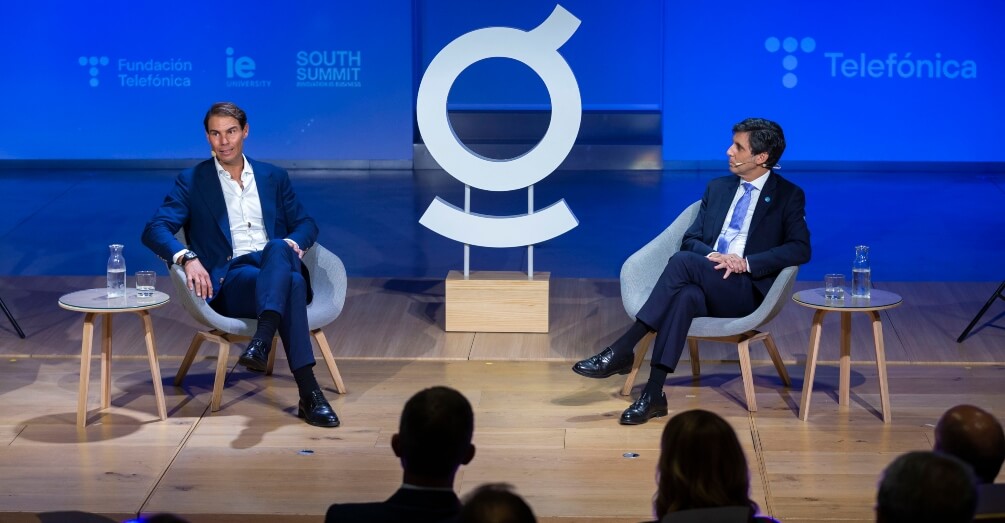 20,000 people from 20 countries participate in this year’s enlightED, focused on bridging gaps in education. The conference can be followed at: enlightED.education.

Today saw the inauguration of the fourth annual edition of enlightED, the global conference on education, technology and innovation, which will bring together 20,000 people from around the world for three days in the Spanish capital to reflect on the major educational gaps in innovation, skills and digitalization.

The inauguration was presided over by Spain’s King Felipe VI, accompanied by Pilar Alegría, the Spanish Minister of Education and Vocational Training,; José María Álvarez-Pallete, the Chairman of Telefónica; Rafael Nadal, the 2008 Prince of Asturias Award for Sports winner. All three highlighted the importance of reducing the digital divide in education and the need for initiatives such as enlightED to help achieve this.

“Digitalization is bringing new possibilities for expanded education inside and outside the classroom and throughout life. At this time, we cannot leave anyone behind and innovation and technology are providing us with a new opportunity for anyone to access the future.”

For his part, Telefónica CEO José María Álvarez-Pallete added: “Education is the cornerstone for achieving a better and more egalitarian society, helped by digitalization, which facilitates the incorporation of new learning methods and democratizes widespread access to knowledge.”

Tennis Champion and Prince of Asturias Sports Award winner Rafael Nadal concluded: “Education is the foundation of a prosperous society and a welfare state. In this sense, technology has changed the rules of the game, but it is crucial not to lose human contact.”

The program for this 4th edition will include 47 round tables and discussions, along with 25 workshops, which will be available in Spanish, Portuguese and English. All of them will reflect on three of the major breaches that have grown during the COVID19 pandemic: narrowing the innovation gap to transform education systems; solving the lack of skills in relation to new social needs; and, thirdly, how to address the lack of digital skills to reconnect with young people and promote positive change.

Since its creation in 2018, enlightED has brought together 470,000 spectators from 46 countries and 300 international speakers, consolidating itself as a global benchmark in the field of educational innovation.

The three-day program today focused on the need to narrow the innovation gap in order to transform education systems, with the participation of thinkers such as Wendy Kopp, CEO and co-founder of Teach for All; Robert Hawkins, global director of Educational Technology and Innovation at the World Bank; Wayne Holmes, research consultant and professor at University College London; Olli-Pekka Heinonen, general director of the International Baccalaureate Organization; and Linda Liukas, programmer, entrepreneur, children’s writer and illustrator. They were joined by representatives of the world’s leading educational institutions such as María Brown, Minister of Education of Ecuador; Milton Ribeiro, Minister of Education of Brazil; or Pilar Alegría, Minister of Education of Spain; accompanied by the presidents of the sponsoring organizations; José María Álvarez-Pallete, Chairman of Telefónica; Santiago Iñiguez, President of IE University; and María Benjumea, founder and CEO of South Summit.

In addition, the Telefónica, COTEC and Bankia foundation presented The Challenges of Training in Spain, a report that analyzes and defines 12 recommendations to promote and improve collaboration between Vocational Training centers, companies and the educational administration, within the context of digitization and the future of employment.

The programming for Wednesday, October 20 will be focused on addressing the lack of skills in relation to new social needs. Taking part will be Michelle Weise, Vice Chancellor for Strategy and Innovation at National University System; Dean Kamen, creator of Segway and founder of FIRST; Jeff Maggioncalda, CEO of Coursera; or Ignacio H. Medrano, founder and Medical Director of Savana; among others.

On Thursday, October 21, the event will explore the importance of digital skills to re-connect with young people and promote positive change. Howard Gardner, psychologist, researcher and professor at Harvard University, known in the scientific field for his theory of multiple intelligences; Kiran Bir Sethi, founder of Design for Change; Vinton Cerf, vice president and Chief Internet Evangelist of Google and co-founder of the Internet Society; Hadi Partovi, founder and executive director of Code.org; and Daniel Goleman, psychologist and author of ‘Emotional Intelligence’, will bring to a close the last day of enlighTED Hybrid Edition 2021.

In addition, the winners of the enlightED Awards 2021 will be announced, recognizing the world’s best practices in entrepreneurship and educational innovation.