Sovereign wealth funds were most active in the technology (25% of deals), services (18%) and life sciences (17.6%) sectors, according to the 2020 Sovereign Wealth Funds Report by IE University and ICEX-Invest in Spain 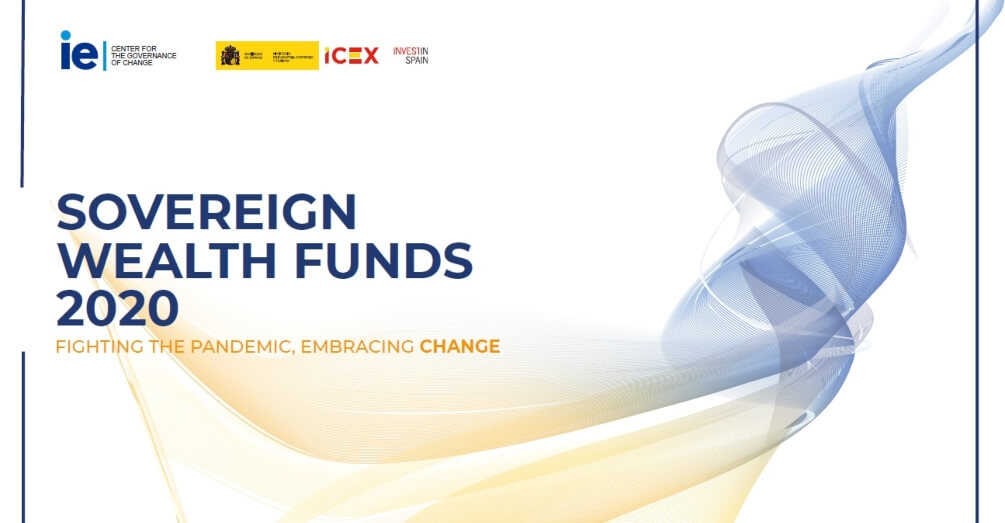 There were 95 active sovereign wealth funds (SWFs) managing more than $9 trillion of assets for the first time, an 8% increase over the previous year.

The sectors in which SWFs were most active were technology, with 25% of deals; services (18%) and life sciences (17.6%), according to the latest 2020 Sovereign Wealth Funds Report, drawn up by IE University’s Center for the Governance of Change, in partnership with ICEX-Invest in Spain and presented today. The report analyzes 165 deals worth $43 billion. The USA, UAE, China, India and Mexico accounted for the largest share of sovereign investment in the period under study.

According to its authors, the period showed a recovery in infrastructure, linked to natural gas, transport and telecommunications, following a detailed analysis of the 42 industries in which investments were made. The interest in real estate also continued, with strong investment in the industrial segment (warehouses, logistics centers and industrial premises), together with counter-cyclical investment in offices and hotels, both pre- and post-pandemic, which are proving highly lucrative for long-term investors.

The technology segment included investments in sustainable food companies, the search for alternative energy sources, the education sector (especially distance education) and fintech companies (mainly payments and neobanks). Investments in mobility solutions (an area that has been heavily invested in over recent years) lost ground. Sovereign wealth funds prioritized investments in biotechnology companies, many of which are still largely unknown, while others have become renowned for the development of vaccines against the Covid-19 virus, such as BioNTech, CureVac and the project behind the Russian Sputnik V vaccine.

As in the previous year, the report points out that the pace of change in sovereign investment goes hand in hand with continuity. By geographical destination, the trend was exceptionally stable, with over ten investment deals in the United States, China, the United Kingdom, and India.

An analysis of the value of investments, however, reveals two less common countries at the top of the table: the United Arab Emirates, through the mega-deal that GIC closed with other partners to manage ADNOC’s gas pipelines, and Mexico, through the joint acquisition by GIC and Abertis of a controlling stake in one of the country’s largest highway operators.

Venture capital investments remained significant in terms of number of deals, but the pandemic brought with it revealing information in 2020. Just six funds managed to maintain their foothold in venture capital investment rounds during this challenging year. This concentration contrasts with the 10 different funds that participated in financing rounds in 2019 and the 14 sovereign wealth funds that did so in 2018. Only funds with in-house teams and a structured strategy showed this strength. Of note once again in this field were the Singapore funds (Temasek and GIC) closely followed by the UAE’s Mubadala, whose strategy, which was described in the previous Report, is starting to pay off.

In addition, the report analyzes the evolution of the sectors hardest hit by the pandemic and those benefiting from the structural changes that the pandemic has precipitated. The crisis has created new regulatory barriers in countries that are traditional recipients of investment and raises concerns about the future development of global value chains, particularly in strategic sectors such as energy and healthcare.

Other sectors, such as logistics real estate, were particularly appealing to SWFs given the present and future strength of e-commerce. In fact, the major logistics operators in Europe and the United States have strategic partnerships with or are controlled by sovereign wealth funds from China, Abu Dhabi and Singapore. This segment has overtaken offices and hotels as the most prevalent, valuable real estate investment niche.

Geographically, the report focuses on two more regions: China and Latin America. This year’s “In Depth” section focuses on the China Investment Corporation, its evolution since its inception and its current challenges: focusing on the domestic economy or seeking profitable opportunities in mature markets with demanding regulation and competition. In Latin America, macroeconomic restraint has enabled US$13 billion in resources to be used to alleviate the impact of the crisis in the region and to support the fiscal and direct aid programs implemented by governments, with Peru, Colombia and Chile at the forefront.

“The sovereign wealth fund industry maintained the same long-term orientation throughout the major international and domestic turbulence of the pandemic year.”

Javier Capapé, director of Sovereign Wealth Research at IE University’s Center for the Governance of Change

“Investment was sustained in alternative energy sources, innovative food companies, technology and biotechnology projects. In addition, there was continued investment in energy (natural gas) and transport infrastructures, and in industrial real estate, fuelled by mobility restrictions and the growth of e-commerce and teleworking. However, the downside of the crisis led to a drop in the total value of transactions and to a slowdown in the number of funds participating in venture capital operations. Not all the funds were able to maintain these high-risk bets when their economies were going through difficulties that required their attention and capital. Many of them were created as “rainy-day funds” and the health, economic and financial storm is still raging,” said Javier Capapé, director of Sovereign Wealth Research at IE University’s Center for the Governance of Change and editor of the report.

Spain, an appealing investment destination for sovereign wealth funds in the year of the pandemic

“Sovereign wealth funds are a leading investor in Spain, not only because of their volume, but because their presence is stable in the long term and well aligned with the objectives of Spain’s transformation towards a digital and more sustainable economy,” said Xiana Méndez, Commerce Secretary of State of Spain. “In addition, this report reflects how COVID-19 has affected the activity of sovereign wealth funds around the world, highlighting that, despite this situation, Spain maintains its ability to attract investment.”

Spain maintained its ability to attract sovereign investment and improved its overall position. It ranked among the top 10 countries receiving investment, with 12 operations in the period from January 2019-September 2020, made by nine different sovereign wealth funds, to the tune of almost €1.3 billion, which is practically the same as the previous year’s report, in a period marked by a drop in global foreign direct investment of more than 42%.

The funds invested in Spain and Spanish companies in a broad range of sectors, including real estate, where the acquisition of a luxury hotel by GIC, the highly active Singapore fund, was particularly noteworthy. Investments were also made in industrial firms manufacturing capital goods for the automotive industry and the renewable wind power sector. Interest in the food and infrastructure sectors continued to be strong.

Nine different sovereign wealth funds invested in Spain during this period. There was continued interest from major funds such as the aforementioned GIC from Singapore and the Qatar and the United Arab Emirates (Mubadala) SWFs. In addition, Sopef (the sovereign co-investment fund established by COFIDES and the Oman Investment Authority) also made its first five investments during this period and another 4-6 deals are expected in the coming months.